A special education teacher at Dream Lake Elementary in Orange County, Florida, has been charged with two counts of child abuse after the principal, Gary Schadow, called police upon suspicion of misconduct. Patricia LaMantia, 56, was arrested yesterday after school officials suspected that she had harmed two severely disabled elementary students. The incidents were believed to have happened on Monday and Wednesday, involving two different children.

Apopka police interviewed the children and witnesses who said that LaMantia took one of the student’s arms and forced her to punch herself in the face until she bled. Witnesses say the alleged abuse was in response to the student hiting LaMantia in the arm. The other student was reportedly punished for using foul language and spitting on the floor. LaMantia reportedly grabbed his face and threw him backwards over a chair.

LaMantia was questioned by police but refused to answer. She is on temporary leave from her teaching position while an investigation continues. LaMantia will continue to get paid until a verdict is reached. 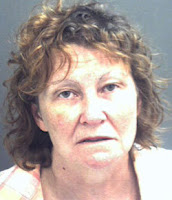 Abbie was restrained 14 times in one day for noncompliance issues.

Welcome to FLORIDA Families Against Restraint and Seclusion


Welcome to FLORIDA Families Against Restraint and Seclusion. If you've clicked on this blog, most likely it's because you or someone you love has experienced the overuse or unnecesary use of restraint and seclusion in public schools. If that's the case, we're glad you've found us, but are sorry you've had need to. We're here to provide guidance and support to those who need it. For everyone else, we wish to inform you that restraint and seclusion are very real and could happen to anyone's children. Every day children with disabilities are restrained or put in seclusion against their will with no parental notification for "noncompliance" and "behavior issues."Children with Autism or Autism Spectrum Disorders are at risk the most.

If you have any questions, please contact us at familiesagainstrestraint@yahoo.com

HELP STOP RESTRAINT AND SECLUSION IN OUR FLORIDA SCHOOLS!

Please Sign the petition below to BAN deadly prone restraints sign the Petition to ban the use of deadly face-down prone restraints. This form of restraint has killed children in public schools and residential treatment settings. There are safe, alternative approaches.

If you have any comments or questions, please send us an email at familiesagainstrestraint@yahoo.com

Please also include your county so we can best address your concerns.

The Welfare of Children Act (HB 7173) amended the definition of "other person responsible for the child's welfare" to include school personnel, thus making it mandatory to report suspected abuse by school personnel.

Some of our services include ABA/VB therapy, Social Skills classes, no cost parent Education/Advocacy training.

For more information please visit our website at http://www.revlearning.org/

We believe that evidence based positive behavior interventions, such as Applied Behavior Analysis (ABA) when used properly, help to prevent the mis-use and over use of restraint and seclusion on children with autism and autism spectrum disorders.


Links to Other Sites

Families Against restraint and Seclusion http://familiesagainstrestraintandseclusion.blogspot.com/